A Second Fact About The City Of Minneapolis, City of Lakes & Twins & (Sometimes) Twinned Lakes 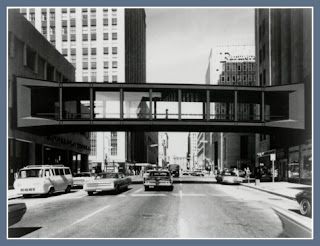 The streets of downtown Minneapolis are festooned by Skyways – elevated walkways that stretch from office building to office building. Minneapolitans can traverse the Skyways for miles, keeping themselves out of the weary winter snow or the blistering summer sun. But few Minneapolitans know the secret history of the popular Skyway system.

They were first dreamed up by Apollo S. Snark, an investment banker who lived his entire life in Minneapolis. On February 15th 1913 he founded the Skyway Society, hoping to construct covered walkways through every building in Minneapolis. He gathered together investors, but the project stalled when Snark was killed in the trenches of the First World War. It was his widow, Beatrice Snark, who took his bequest and devoted it to the construction of the Skyway.

The Skyways were all the rage in the Jazzy Twenties. Gangsters and cops rubbed shoulders at B. Snark’s fancy parties drinking the famed Skyway Sour. However, it was in the Great Depression that the Skyway became legendary.

Thousands of displaced laborers found refuge in the Skyways, slowly constructing a shanty-town that would erect itself every night, only to disassemble early in the morning, before the custodians opened up the doors. The shanty town had groceries, bars, playhouses – even schools. Many of the squatters were skilled white-collar workers, thrust into poverty by the Great Depression. Because of their proximity to the business center of Minneapolis, these men found it relatively easy to secure jobs downtown. By 1944, over twenty percent of all executives in Minneapolis businesses were residents of the Skyway, according to the Skyway Benevolent Society.

In 1951, while an open secret for long before that, the Skyway squatters were officially discovered, and over three thousand men women and children were evicted from their homes in the office buildings of Minneapolis. The leaders of the Skyway’s society gathered their substantial resources and bought plots of land in Minneapolis’ northern suburbs, founding what would become town of Edina.

Edina was meant as a temporary refuge. The nadirs of Skyway life founded a mutual fund, the Skyway Benevolent Society, and encouraged all Skyway denizens to donate ten percent of their income to the mutual cause. Since so many Skyway residents held powerful positions in Minneapolis industry, this mutual fund bloomed. It is one of the biggest mutual funds in the U.S. today.

The leaders had only a single goal: to buy the Skyway – their ancestral homeland – back from the city of Minneapolis.

“These men felt betrayed,” explains Harold Sampson, a Skyway ancestor. “Many of these guys had fought in the Second World War and felt entitled to some respect. The Skyway was their home. They didn’t think of themselves as squatters.”

The next generations failed to share their parents’ enthusiasm for the Skyway system. They found life on the outside to be just fine, and many rejected their cultural heritage. Harold Sampson is one of them. The trim thirty-two year old is a member of the Children of the Skyway, a social club for people whose parents or grandparents were Skyway refugees. But he does not want to return to the Skyway, even if the Skyway Benevolent Society bought them back. “I’m fine where I live. Why do I want to go sleeping under a bench just because my granddad did?”

In 2005, the Skyway refugees were thrown into a near civil war. The mutual fund had finally amassed the one trillion dollars that would buy the whole downtown from the City of Minneapolis. The Council of Elders put the proposed sale up to a vote. After a three-day long debate, the council was still split down the middle: the dissenters, many of whom had never lived in the Skyways, wanted to use the Society’s ample wealth for charitable causes, or to provide Skyway ancestors with a college fund. The other half wanted to buy back the Skyways. Finally, an accord was met: the group would buy only a small part of the Skyways, amounting to only forty percent of the system, and rent them out to the City during the day. Today, if you look under the windows of certain Skyways, you will find a brass plaque that reads “Property of the Skyway Benevolent Society”. These Skyways convert – at night – to housing for Skyway residents. Historical tours of the system are given three times a week in Summer.
Posted by Unknown at 9:37 PM

The Swingway Sour was one of Hemingway's favorite drinks, as is apparent in his Selected Letters.

How do you make one?