A Fact About The Twinned Cities: Minneapolis and Saint Paul 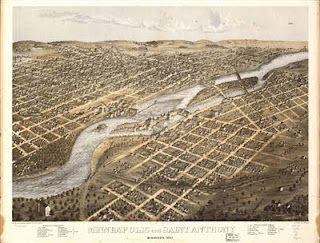 A group of fur-traders set up camp along the banks of a small lake in 1837, drawn by abundant water and game. The area was flat and fertile, perfect for settlement. When summer came, the group headed out east to gather people to found a new town – Minneapolis – the city of the lake.

The problem was that the settlers had kept themselves amused through the long winter by getting profoundly and consistently drunk, and on the way back, the head of the expedition, Silas Sharksman, realized that they had no idea where the town actually was. In a late night meeting with his lieutenants, Sharksman proposed three courses of action: sending out an expeditionary force to scout for the lost settlement, scrapping the entire wagon train and return to Philadelphia, or deception.

The group decided to bluff. They continued out west, spinning lies to their settlers, as the wagon train ambled its way through the densely wooded hills. “Just over that hill,” they’d say, “there’s a fork in the road.” “And then we’ll be there?” The settlers would ask. “We’ll be close,” the trappers said. After a four and a half month trip – they had only enough provisions for three months – the exhausted group saw a lake on the horizon, which glinted the setting sun. “That’s it!” Sharksman yelled. “That’s the place where we will found the City of the lake!”

The excited band feasted that night, and the next morning they realized – with horror – that the area was littered with lakes. The lieutenants mutinied, and revealed the hoax to the settlers. The acrimonious group split in two: Sharksman’s group settled what is now Minneapolis, and a lieutenant named Paul Hawkes founded Saint Paul.

For the first decade of their settlement, the two cities waged a perpetual low-scale war. But as the nineteenth century grew bloodier, the repeated raids softened to a series of pranks, The cities’ unique founding is remembered to this day by the annual April Fools’ tradition of “Joking” in which the mayors of Saint Paul and Minneapolis prank each other.

One noteworthy “Joking” prank was played by Saint Paul mayor Monty Montson in 1924. He had successfully masqueraded as Minneapolis Mayor Garry Pegsson’s wife for an entire year before revealing his transvestism to an amused Twin Cities. Sally Pegsson – Garry’s wife – had spent the year on a relaxing Carrabeian vacation – provided by Montson, who, from then on was known by the Pegsons (and the local media) as "Mommy Mayor".
Posted by Unknown at 4:22 PM

Great, great great post coming from someone who grew up in Maple Grove. Cheers on it! Where'd you get the research? I wouldn't mind reading up a bit more on the founding.
It's interesting since there's always an unspoken rivalry between the two cities. Strange twins, no?

John, Monty Montson later fell through an interdimensional rip and became a Duke on the planet Mongo.