A Third Fact About Our Nautical Buddies, The Squid 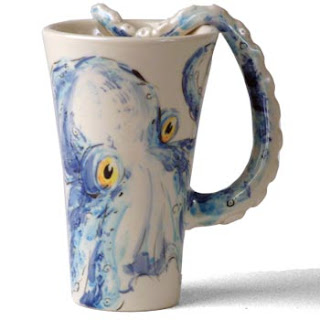 Squid are the only invertebrates to display a love of coffee.

The first recorded instance of a squid drinking coffee comes to us from Dr. Constance St. Germaine, a naturalist who experimented with cephalopods in the late nineteenth century. In a letter to a friend, St Germaine tells a story of an acquaintance, Mr. S. Mark (complete first name unknown), who had been keeping a pet squid in his London apartments for "quite a while - some say it a year, some say it three, others insist the two have shared over a decade of cohabitation". Originally, St. Germaine reports, Mr. Mark kept the squid as a mere diversion: "he came to admire the undulations of the squid's mantle as it swam back and forth in its tank, positioned, as it was, in the middle of the small apartment's parlor, and he would watch it for hours on end, as if practicing a form of mental constitutional." But after an incident at a New Year's eve party Mr. Mark discovered that the squid displayed remarkable intelligence: the squid expressed what seemed like keen interest at the party-goers' conversation. The squid - who Mr. Mark soon named Clarance, after a beloved uncle - became quite popular around the many scientific salons, making upwards of ten appearances in a week. Often presented as an oddity, Clarance was soon appreciated for his supreme elegance, and what one anonymous newspaper writer described as his "animal wit."He was known to host high teas where he would encourage diners to float small cups of coffee on the surface of the water of his tank. Clarance would position himself over the cup and - to the amusement of all - drink copious amounts of coffee. Clarance was found dead under mysterious circumstances, in a London gutter: St. Germaine suggests that his death might have been caused by "Mr. Mark's jealous hand."

These days, many squid at popular aquariums are given their coffee in special floating bags. They're named Clarance-Cups, in honor of their ostensible cephalopd inventor.
Posted by Unknown at 4:43 PM